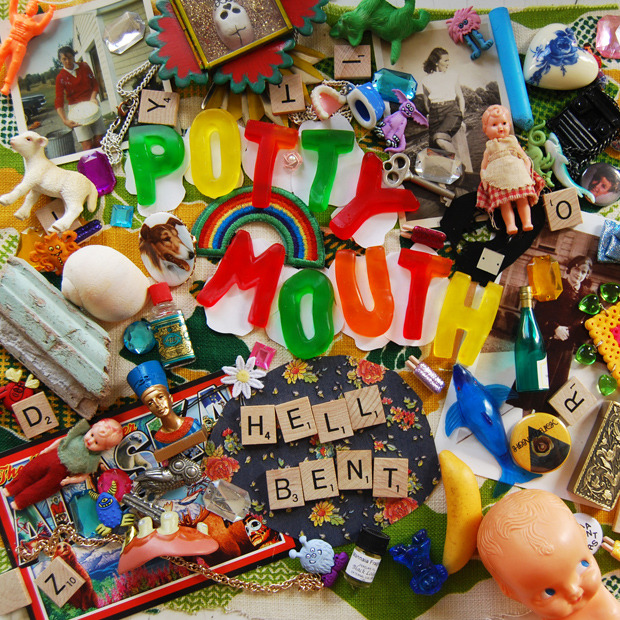 It’s easy to write the same tune to Potty Mouth’s debut full-length, Hell Bent. The tune would go something like this: four babes find each other, jam together, and are now the poster children for modern feminism and write songs for women, by women—because universalism isn’t afforded to an all-girl band. But while some riot grrrl, Bikini Kill-style comparisons and Liz Phair references make sense (and they could be kissing cousins with Speedy Ortiz’s Sadie Dupuis), the girls of Potty Mouth are playing in the same sandbox as Parquet Courts and the rest of today’s punk rockers who lean toward a friendlier chorus and shouldn’t be relegated to a girls-only club.

Hell Bent isn’t a perfect record—instead, the record is rough, simple, quick—a shot to the ears that shouldn’t leave you immediately reaching for girl power metaphors, but instead reflecting on the raw realities of living and loving in this millennium. Sprung from a self-fueled DIY movement in Northampton, Massachusetts, Potty Mouth are used to living on strings from one thing to the next, getting together an EP between three independent labels and learning how to play in the two years before this offering. Here, they expand but don’t complicate, powering through ten songs that buzz on with the same heavy surge.

“The Spins” is a fast-paced tale of fucking partying that only ends before you think it should, while “Damage” tells a more heartfelt story of a friend who needed (but wouldn’t ask for) help and the strangely ironic feelings of betrayal you go through knowing you weren’t trusted with the hard times. “Sleep Talk” is one of the best songs I’ve ever heard about dreaming. It captures the impact of imagination as the lyrics describe the difficulties of knowing you did something you shouldn’t have, even when you only dreamed that you did – the nighttime reality still affects you.

“The Better End” combines one of the album’s most laid-back instrumentals with one of its most abrasive vocals to make a really ear-catching track that won’t be your favorite on first listen, but the stretching song will soon plant its hooks in your slow head-bang that teases out a welcome release for lovelorn frustration. All along, Potty Mouth rely on Abby Weems’s deadpan singing, fuzzy and tough riffs from guitarist Phoebe Harris, and the frenzied fly-around of some pretty hardcore punk balanced with a more melodic sensibility and more understandable lyrics that drive the songs ahead.

The girls of Potty Mouth won’t be able to avoid the chatter around their all-female membership—as it seems no woman who visibly participates in our culture can avoid addressing her gender and being judged on how she reflects all womankind. They’ve handled it gracefully and reinforced what should by now be common sense to us all, but blatantly isn’t, about women in ____ (fill it in). But these girls aren’t living for a movement beyond the power of DIY. Living on the edge of independence, they can rock your fucking face off while they spew their own observations and musings, and that’s all they want to do.