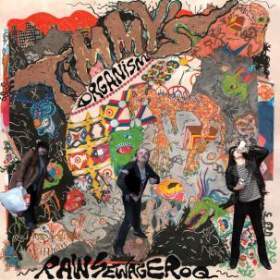 Raw Sewage Roq is the most apt title conceivable for the latest Timmy’s Organism album. There isn’t the slightest amount of irony or cheekiness in the name, either. The album is completely unadulterated by the contemporary tastemakers. It doesn’t pander, apologize or sugar-coat its unabashed rock ‘n roll and often tasteless subject matter. See the tacky album art with an unflattering photograph of each member cut out and pasted upon a gaudy, filth-centric drawing and realize how unpretentious this record is. Front man Timmy Vulgar’s recent output under the Human Eye and Timmy’s Organism monikers has been nothing short of prolific and judging by Raw Sewage Roq, he shows no signs of marginalization.

It traverses the rock spectrum with unapologetically formulaic riffing, gratuitous solos, surprising balladry and lengthy jamming, but all with such singular character that there is little to find fault with. In straight-ahead rock tracks like “Mind Over Matter” and “Bouncing Boobies,” Vulgar crafts enticing, anthemic choruses that are propped up by savage, testosterone informed verses that never wear thin. A quick descent into feral howling or gang vocals punctuates the lyrics as soon as their absurdity begins to set in. The words oscillate between asinine and esoteric with flippant delivery. “Mind Over Matter” employs borderline throat-singing on a chorus and on the second track Vulgar even manages to rhyme “bouncing boobies” with “Flamin’ Groovies.” Basically, Raw Sewage Roq contains everything one would expect from a man who can be found on YouTube vacuuming the ceiling during an acid trip.

Of course, the album is indeed fraught with the sense of sewage. An evocative word that many of us likely associate with Detroit and one that Timmy’s Organism deftly channels on its album. Even watching the brown vinyl rotate is stomach churning. Its enticing though, in the same voyeuristic way as observing a decrepit urban locale.The careening drums and Vulgar’s gruff, nearly guttural vocals begin to creep into listeners’ nostrils and become more potent as the album plods along. During the after-party for an urban infrastructure’s complete failure, Timmy’s Organism will be the house band and Raw Sewage Roq’s title track will be the swan song.

The simply route to sonic sludge would be sloppy performance and viscous production, but Raw Sewage Roq relies on neither. Virtuosity is evident in each member of the power trio and the production is surprisingly crisp. Instead, sewage shines through in the vocals and heinous guitar tones. The album’s sole ballad, “Drunken Man,” epitomizes a fetid and turgid slime of a guitar tone in each light strum, as if a decade’s worth of filth was slowly seeping from a manhole.

Although Raw Sewage Roq is heavily informed by Detroit, one of its strongest songs is certainly an ode to the latter half of 20th century America. “Cats on the Moon” references Elvis, 70’s porn and John Travolta with startling conviction. There isn’t quite a coherent point made, but from the quick procession of decidedly American imagery and symbols of trash culture, we can infer where Timmy Vulgar’s allegiance rests. Vulgar and whatever mob of musically competent degenerates he wrangles into his next band will be lurking somewhere near the apocalypse, gathering discarded cultural artifacts from the gutter and watching a b-movie in the window of a department store because that is the variety of environmental impetus that informs his music.