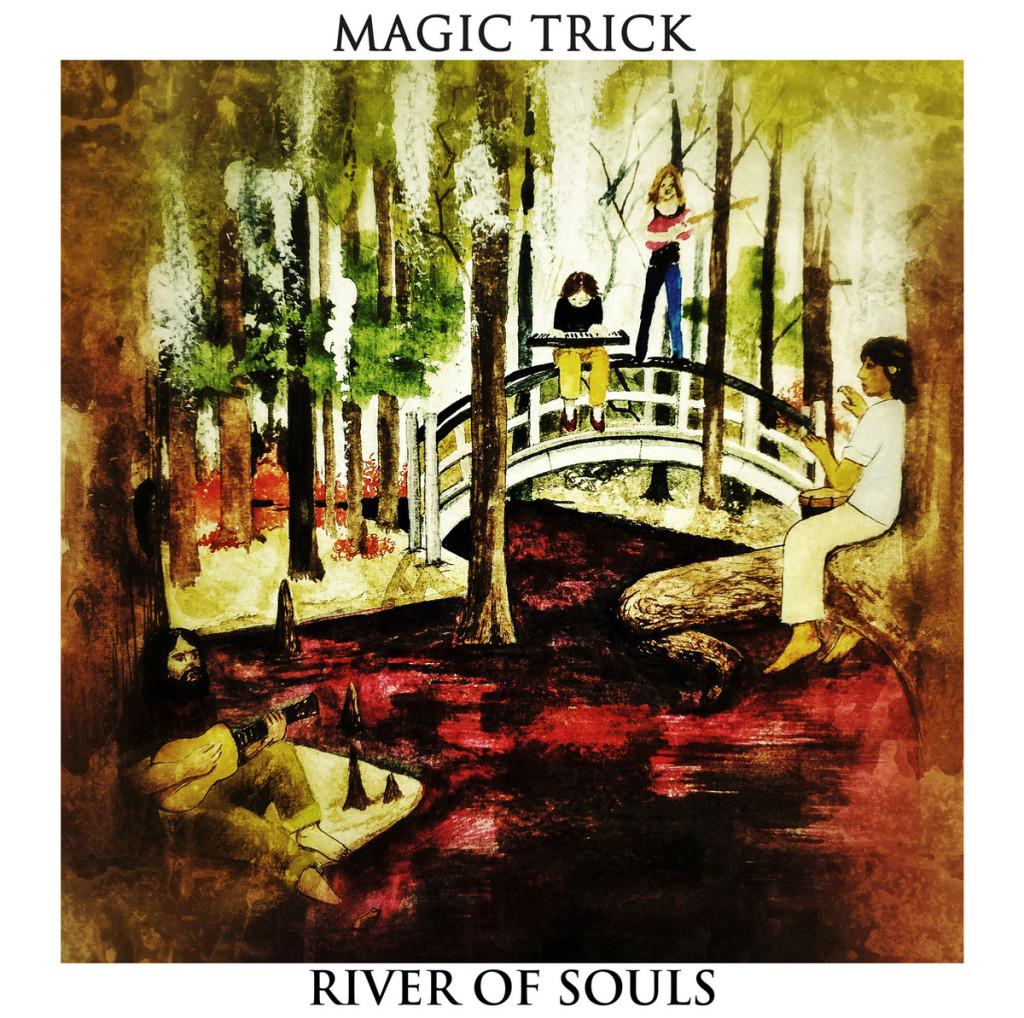 Magic Trick's third LP, River of Souls, opens with a spatial and maybe fecund metaphor, “Come Inside”. Unfolding with measured pace and the conversational baritone of Fresh and Onlys front man, Tim Cohen, the album's lead track presents any number of ways to find port in the storm. It is existential, to be sure, rhetorical questions like, “What would we know of the sentient life?” and “How does it feel to live on the mirror's other side?” while duets and trios build with addition of vocals from Noelle Cahill and Alicia Vanden Heuval. The acoustic guitar progression is reassuring – Cohen is looking for connection here, “Come Inside”, he urges us. River of Souls becomes this journey, a bit blithe at times, a playful trip through the 1970s AM band and pleasant college radio tropes, but a meditation on meaning that always seems to slither away, even in the confines of the three or four minute pop construction.

Language of seeking, a playful future deliverance, becomes the organizing frame of Cohen's path through River of Souls. Mostly he seems more interested in problematizing the idea of salvation. On “At The Store”, he assures us “We'll find it all at the store”, a brand of winking commercialism that the artist can scarcely believe. Later on “Beloved One”, Cohen creates an imagined future domestic paradise with dark edges: “One day beloved one, all of this will be yours / the footsteps in the garden, the shadows on the wall / the house you've always haunted, you'll have it all.” Like the crooked girls he enjoys on “Crazy Teeth”, Cohen rarely plays his listener straight even when he's urged us for companionship on the journey. The spacious, wandering guitars and silky arrangements – synthesizers often arrive on River of Souls like an invited and awaited guest – prove to be the nest for these reflections, a glittering and problematic universe. Cohen confesses to the “lonely ruins of my mind” on “Blinding Light”, the first in a series of increasingly forthright expressions – “Salvation” and “Bridge of Gold” are the next two – in the record's second half. Of course, sounding like a New Pornographers LP shot through with chemical opiates, the pop rarely strays far from the recognition of pop. Cohen is too self-conscious to describe this search in certain terms. Even the mournful “Salvation” seems to be winking at the listener as Cohen sings the titular lyric and then a wordless melancholy “whoa-whoa”. Likewise, when the album's title shows up on “Bridge of Gold”, it is hard to believe Cohen recommends death when he sings “River of souls carry me home to the one I love.”

All of this is, perhaps, academic – Cohen playing misery and joy off one another as obvious narrative arcs. The final track, “I'm A Joke”, emerges as a not entirely dispiriting reminder that even the most depressing moments have cheery guitars to soundtrack them. Sounding a bit like the Magnetic Fields, the breezy chord progression and blinking synthesizers belie the shade beneath. We aren't meant to take lyrics like, “God loves him more than he loves me” as anything more than playful expressions of the crushing darkness at the center of modern life, what misery would sound like if misery knew it was playing misery. That Cohen is mercilessly self-aware never leaves his work with Magic Trick or the Fresh and Onlys – consider the very band names for a moment. The arrangements maintain the cheery mood as the band wades through the depths, a sense, by the end, that the opening invitation was, itself, a bit rye. If Cohen wants us to “Come Inside”, it is no panacea on the rest of River of Souls. Never having a totally bad time sounding like he's having a good one, or never having a totally good time exploring the depths, Cohen proves able to breezily march through one of the most upbeat tracks, “My World” that, unsurprisingly, centers on a lyric like, “Please don't take my world away” before the song's final movement spins off into the sky. Tim Cohen is always playing Tim Cohen, and Magic Trick refuses to offer the listener a coherent narrative in anywhere else but in aesthetics.

A good time through and through, River of Souls is a compact record – just over 40 minutes – that the listener can encounter on multiple levels. This, then, may well be the invitation at the outset, to “Come Inside” for whatever crushing one-liner the singer will pair with a singable melody, to laugh at yourself crying. Like Stephin Merritt playing a James Mercer creation, the despair is as wanton as it is recongnized by the artist as it is easy to hide in a sunny progression. A bit circular, and denying of easy or polemical treatment, Cohen builds a world of playful misdirection on River of Souls, a not unpleasant journey discussing the limits and narrative rigidity of the idea of journeys. It is nothing but the best worst time of our lives.