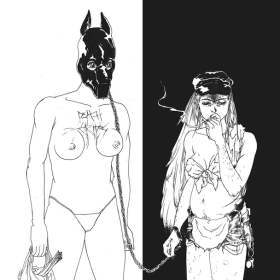 Outside of an mp3 for “Lord of the Game,” I honestly had no idea what to expect from Death Grips, Sacramento's premiere aggro-rap misfits; all I knew is that I had to help these guys carry a full-sized guillotine up the Market Hotel staircase, but anything for Zach Hill right? (Yep, that is right.) The vibrations were so severe, from some combination of Hill's raucous footwork and a hundred moshing shirtless dudes' clumsy ballet, that most of the night was spent physically holding up speakers from a possible swan dive (in other words: a rare treat). That was last summer, just after Exmilitary started making waves with its visceral resurrection of rap rock's MTV-stamped carcass as legitimate rebel music, but a few notable endorsements later (namely an Epic record contract) we're given The Money Store and almost nothing has changed. Frankly, I couldn't be happier about it.

MC Ride's abstract anarchy of poetry still flows like a conspiracy theorist-turned prophet's hidden memoirs, the cadences dancing around the downbeats, keeping you waiting for punctuation and closure while he froths at the mouth like Chuck D bitten by a rabid dog. Andy Morin's beats still bang super grimy, clever mishmashes of bro-step bass abrasion, disembodied pop culture stains, and industrial ferocity. And Zach Hill…can you think of anyone else with the precision and creativity to work around these blistering speeds and hyper-technical dance grooves? Exactly. Their combined efforts play out like Limp Bizkit making their political record as a live-recorded CS, or a version of Dead Prez that even wanted to think about trying to become palatable to “hip” people's ears. Sure, “I've Seen Footage” is possibly the most annoying song of the year, but at its best, like highlights “Get Got” and “Lost Boys”, this record results in a gleefully irony-free catharsis, as close to a rock n' roll experience as I can imagine one getting in an age where Skrillex wins multiple Grammys.

The sentiment, however, is far removed from rock's bloated self-indulgence– tracks like “The Fever (Aye Aye)” and “Hacker” play out more like sober, cautionary tales even when riddled with drama, forcibly jolting you into motion with violent intensity. The bark is harsh and lean, the bare-bones stench of bread and water in place of weed and liquor luxury. Imagine a homeless Robin Hood, still railing on the social inequalities of his time, but, stripped of his weaponry and zeal, unable to do anything about it but simply watch his folks fade away while he fights one last time with bare hands. The one word that comes to mind is injustice. Even the album title feels like an allusion to the inevitable unfairness and lunacy of money, of consumption, of power, of status or authority. Not that Death Grips aim to move you to voting polls or picket signs necessarily, but that they are in resistance mode throughout. It's a refreshing listen, so passionate in its own eccentricities as to become totally resilient in the face of culture capital hoarders.