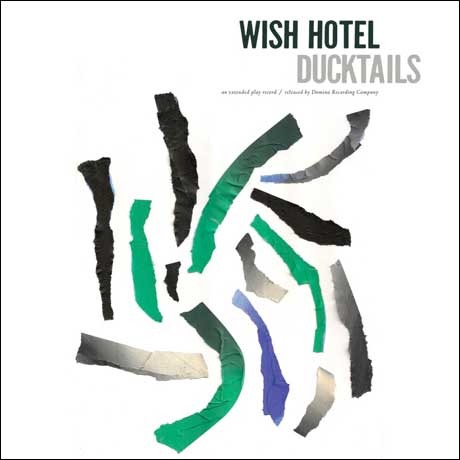 The Wish Hotel EP is the second Ducktails release this year, following The Flower Lane. Ducktails is known mainly as the solo project of Real Estate guitarist Matt Mondanile—and where, for the first few releases, that was an apt descriptor, “The Flower Lane” boasted some really solid collaborations, and took Ducktails’ signature brand of indie-rock easy listening out of his bedroom. “Letter Of Intent” featured vocals by Future Shuttle’s Jesse Farkas and Big Trouble’s Ian Drennan, backed by Daniel Lopatin on synth and Joel Ford on bass. Madeline Follin of Cults sang the chorus of “Sedan Magic.” In addition to broadening Ducktails’ instrumental palette and offering other creative minds to counter his own, those collaborations offered a respite from Mondanile’s vocals, which can be flat and sort of expressionless.

“Flat” and “expressionless,” though, are loaded words when discussing music. I don’t mean “flat” in the sense of pitch—and even if that is the case, it sounds like it’s being addressed with a hint of autotune at points on “Tie Dye” (“pay no attention to the things they say.” Maybe that was an aesthetic choice). I mean “flat” primarily in the dynamic sense—with Mondanile’s delivery, everything carries equal weight, which is not inappropriate, as his lyrics tend to center on suburban boredom. And I mean “expressionless” the same way a player piano is expressionless. It gets the notes out—you supply the emotion.

Between the toothless sounds, the quotidian lyrics, and the repetitiousness of it all, the main thing addressed here is boredom. Wish Hotel, like most of Ducktails’ previous output, is music as escapism, in which one plays guitar to escape the quotidian affairs of life and not to dig more deeply into them. It’s for this reason that I, as a listener, forgive the pervasive expressionlessness of Ducktails and even enjoy it when the mood is right. I hear a dude using his guitar as a way out of boredom. He’s not thinking too hard about having his sonic layers challenge each other, preferring to let them ride each other out. At times this creates a nice brain-blanket — by the end of “Tie Dye” I feel like I’m in a cozy sonic bed I don’t want to get out of. But other times, it drives me crazy — the bluntly titled “Jazz” takes a mildly challenging 6/4 time signature and manages to go through three and a half minutes without offering a counterpoint to the walking bassline. Fittingly, Mondanile sings “I don’t know what to do anymore/ you can help me try to not sound bored” (I think he says bored, I might be projecting). The noodly guitar solo on “Wish Hotel” conveys nothing to me but an admiration for Neil Young, and if I’m paying active attention to it, I can only go along with it for so long.

In short, Wish Hotel EP does what I’ve come to expect of a Ducktails record. It was probably fun and exciting to make, but the result is not exciting, or particularly evocative, or even that much fun to listen to. It’s Easy Listening for those who like to hear washed-out guitars and gentle synthesizers while they zone out. By 2030, we’ll be hearing Ducktails in elevators or I’ll eat my boots.