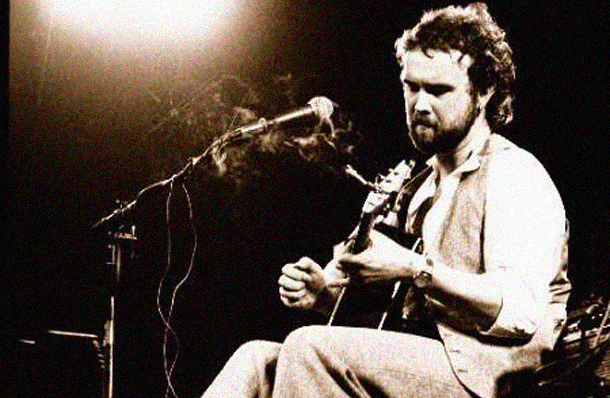 Born Iain David McGeachy in Surrey, England, the late, great John Martyn, stands among the redwoods of British folk/post-folk singer/songwriter anti-heroes, and his place in that forest is secure forever. His parents both sang light opera of the Gilbert & Sullivan variety, so it’s tempting to imagine he had music in his genes and in his soul right from the start. His forty year, twenty-three album career is too massive to cover here, but I’ll do my best to summarize. In the late 60s he hit the road and lived as a hobo, taking only what he could carry with him. He transcended folk and roots music almost immediately, and embraced what he referred to as the funkier side of things, developing a love of soul and then, ultimately, jazz, the latter having led to his proclaiming Pharaoh Sanders his favorite musician.

He played acoustic guitar quite deftly, then added electronic effects to his sound that were incongruous to many people’s ears at the time. He was about twenty years ahead of everyone from Beck to Badly Drawn Boy, and he worked with Eric Clapton, David Gilmour, Lee Perry and a range of gifted players who all called him an organic musical genius. He could sit down and, in an instant or two, in any context, create something musical. His talent and imagination led to him becoming a roving musical nomad, exploring the overlapping territory of blues/jazz/rock in a way no one else has, or will. He’s a kindred spirit with his friend Nick Drake just as he is with the also recently departed Gil Scott-Heron. He was a chameleonic figure, and his music is as impossible to categorize as was the man who made it. This guy was a fucking honest-to-goodness musical troubadour. The kind of iconic character Bob Dylan would sing about in his songs.

He was the subject of a critically-acclaimed BBC documentary entitled, Johnny Too Bad, that chronicled the making of the album, On The Cobbles, but personal struggles with alcohol and drugs, along with marital strife, and having a leg amputated, had overshadowed the music in recent years, and unfortunately, his name doesn’t get dropped among the hip crowd like Richard Thompson, Nick Drake or Bert Jansch, but it should. His wildly eclectic discography includes numerous groundbreaking albums: Stormbringer, Glorious Fool, Solid Air, Grace And Danger, One World.

This new album, Heaven And Earth (Hole In The Rain), brings together various parts recorded over an eight year period leading up to Martyn’s death. (He intended to record with Pharaoh Sanders for his next project.) Martyn’s friend, Jim Tullio, with co-producer Gary Pollitt, pieced this album together as a posthumous tribute and it demonstrates just how “naturalistic” John Martyn’s music was, with the miscellaneous elements coming together like an intricately muddled puzzle. The title track is a melancholic-soul love poem, generating a quiet storm of its own with a nice emotional arc in the refrain (“I’d move heaven and earth, just to be with you…”), his drunken, slippery vocals and guttural, damaged voice acquired over decades, with slurred and dropped syllables, probably sounds quite alien to most people, but it really captures the sensibility of these songs very well. He’s also a kindred spirit with Roky Erickson and Tom Waits in that way. He’s an interpreter, not just a singer.

“Could’ve Told You Before I Met You” has a wickedly simple, nearly irresistible hook that should knock people on their asses, if they’re paying attention and, again, the vocals slither around the tune in his weirdly alluring way. I have listened to this song a couple dozen times, and I still have no bloody idea what the hell he’s singing about (beyond the chorus), but it doesn’t matter. It’s an existential thing, the songs call you to jump in and get lost, pushing repeat on the disc player over and over again. Some tracks are representative of the entire album in their cut and paste flow, like a cleverly constructed film that folds shots and scenes in and out of sequence from the beginning, without revealing whether they are flash-backs or flash-forwards, the results being bigger than the sum of those parts. Jim and Gary did their friend proud, and they did so by mostly leaving well enough alone where they could.